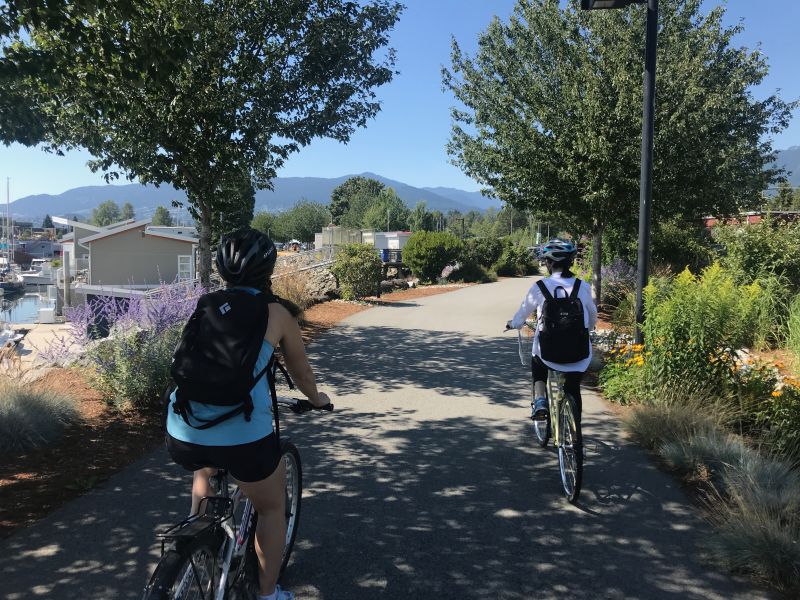 Follow along with us this summer, as Joming Lau, HUB’s Bike Host Program Coordinator rides along with a few Newcomer Bike Host program matches to share what it’s like to participate in the program.

I turn onto a tree-lined street, and I see Tina walking up to the base of Karin’s apartment. We catch up for a few minutes about how her summer has been so far. Karin arrives shortly after and we walk together to a nearby bike rack, where Karin has an extra bike that she’s been able to lend to Tina for their weekly rides.  Karin has come up with the plan for their ride today – take the Seabus across to the North Shore and then ride along the North Shore Spirit Trail to Ambleside Park. She learned about the ride through Lets Go Biking, a website that has a collection of easy rides for cyclists of all ages and abilities around Metro Vancouver.

Tina has been in Canada since 2016, and is working while currently taking advanced LINC English classes at ISSofBC. She is one of 35 newcomers who joined the Bike Host Program this year. Tina has experience riding in China, but is interested in learning the cycling rules and routes in Vancouver. She is matched with Karin in the program, a passionate cyclist, who is interested in sharing her knowledge and love of biking. The pair are halfway through the program, and it’s nice to see how comfortable they are around each other. I notice they casually chat about their lives whether it be Tina’s excitement to start school in the fall, or what’s for dinner at Karin’s house this evening. They tell me that they have both enjoyed learning about the similarities and differences in one another’s cultures as well. It’s allowed them to see things from a different perspective, and Tina is especially grateful for this.

Turning out from a quiet side street onto the Dunsmuir protected bike lane, we ride for a few minutes until we arrive at Waterfront Station. Soon, we are sailing across Burrard Inlet on the Seabus. Getting our bikes onto the Seabus was easy, and we join a few other cyclists who had the same idea. Once we get to the North Shore, we follow painted wayfinding signs on the ground to the North Shore Spirit Trail, and we are filled with a sense of adventure, as it’s all of our first times riding the full length of the trail. Biking along the waterfront, we enjoy views of the city, until we run into the trail which threads its way between quiet residential and industrial areas. The next thing we know, we’ve reached Ambleside Park where the smell of the ocean greets us.

A tradition Karin and Tina have developed is to have ice cream at the end of every ride, and today was no exception. We were able to find a gelato store along Marine Drive to sit down and chat for a while about their experience in the Bike Host Program. When asked about what some highlights of the program have been for them, they jokingly mention the ice cream that await them at the end of each ride as a good incentive, before Tina gets a little more serious, “I have been able to learn a lot of new things from Karin, who is very patient with my questions. We have been able to share lots of ideas and thoughts, and one of the highlights has been being able to make a new friend”.

“Besides the ice cream at the end of each ride and seeing more of the City, what I’ve enjoyed most is being able to make a new friend.” – Tina, newcomer from China

Newcomers like Tina benefit from the program in ways beyond learning to bike in Vancouver. They also get a chance to meet new people outside of their regular social circle, be exposed to new perspectives, and practice their English.  Tina remarks that since she’s been in this program, she’s had the opportunity to talk about more complex topics in English, rather than simply switching to Chinese as usually happens when speaking to coworkers. She is starting school in the fall, and is thinking about maybe incorporating cycling as part of her commute.

After some delicious gelato, we begin our ride back to Lonsdale Quay to catch the Seabus home. The trail feels more familiar now as we retrace our path back to Lonsdale Quay, and we don’t need to consult our phones for directions anymore. It’s later than any of us expect, but as the saying goes, time flies when you’re having fun!

About the Newcomer Bike Host Program:
The Newcomer Bike Host Program is a collaboration between HUB Cycling and the Immigrant Services Society of British Columbia (ISSofBC) in its second year. The program matches recent immigrants and refugees with local “host” volunteers for companionship and cultural orientation to Vancouver’s active transportation lifestyle. Learn more about the program at https://bikehub.ca/bike-education/newcomer-programs.

Donation bikes needed
We're in need of bikes in good working order to donate to program participants upon graduating the Bike Host program. City bikes and step-through bikes are preferred. If you have a bike you're willing to donate, please get in touch with joming@bikehub.ca.