Bike Host Ride Along: Becoming part of the local bike scene with Bibigul and Dave 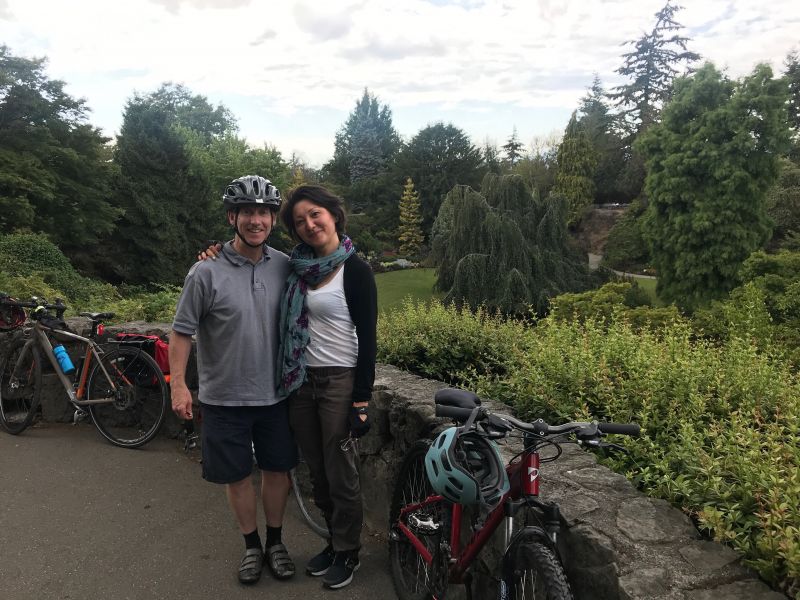 A few weeks ago Joming Lau, our Bike Host Program Coordinator joined Bibigul and Dave for one of their weekly rides. Here's a quick recap of this match, and his ride with them.

Bibigul arrived in Vancouver about two years ago from her native Kazakhstan. She joined the Bike Host program as one of 38 newcomers. Although she had never ridden a bike before the beginning of the summer, she has become a confident cyclist with the help of the Bike Host Program and her volunteer Dave.  Dave has really enjoyed seeing Bibigul's progress through her time in the program; beginning as a new rider and progressing to quieter residential streets on our ride today.

We began our ride near Main and 33rd, biking through the Mountain View Cemetery, which has paved off-street trails, perfect for learning to shift gears and practice hand signals. Dave and Bibigul took me to a special spot, a lovely water fountain where they often stop for a quick break and a chat during their rides. From there, we rode along the Ridgeway Greenway to Queen Elizabeth Park to enjoy some of the beautiful scenery. This was Bibigul’s first time on some busier roads and the ride included crossing major intersections. Where traffic was at its busiest, Dave rode in front and I followed behind with Bibigul in the middle of our mini peloton. She looked comfortable as we rode along, occasionally stopping to ask questions such as what the correct gear is for a hill climb.

"I had a goal through this program of joining the "tribe of bikers" that I always see riding around the city. Now when I see a bunch of bicyclists, I feel like I can more readily identify myself as part of that group." - Bibigul, newcomer from Kazakhstan.

Dave is an experienced rider and a dedicated Bike Host volunteer who joined the program to share some of his knowledge and enthusiasm for cycling with the community.  He spends several hours each week cycling with Bibigul and this summer they have enjoyed exploring the city together. Just a few weeks ago, they even rode a tandem bike along the Stanley Park Seawall early one Saturday morning. He has really enjoyed his time with the program and, with his coaching, Bibigul has been improving with every ride. She has found the program to be fantastic way to meet great people, and to connect with them on a unique and different level.

Biking in Vancouver provides mobility and freedom, allowing newcomers to see the city from a new perspective, and to discover some of the city’s hidden treasures. For Bibigul cycling also means feeling like a local; like she’s now part of a new tribe.

Our second year of the Bike Host program is wrapping up this month. Learn more about Bike Host at http://bikehub.ca/bike-education/newcomer-programs.

About the Newcomer Bike Host Program
The Newcomer Bike Host Program is a collaboration between HUB Cycling and the Immigrant Services Society of British Columbia (ISSofBC) in its second year. The program matches recent immigrants and refugees with local “host” volunteers for companionship and cultural orientation to Vancouver’s active transportation lifestyle. Learn more about the program at https://bikehub.ca/bike-education/newcomer-programs.