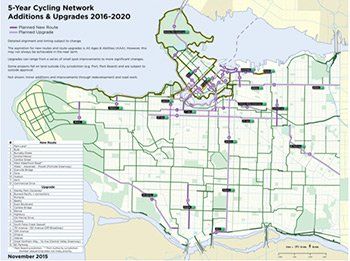 a report, map and summary of the additions and upgrades to the local cycling network, plus a 'look ahead' to the active transportation projects to be delivered in the next year and a half.

Overall, the plan is a major sign of progress for anyone who rides a bike in Vancouver - or would like to. We'd like to thank the City of Vancouver for their commitment to improving the cycling network, including bike routes:

All are highly desirable routes for transportation, recreation and 'daily use' cycling, and will be all-new network infrastructure.

Many of these are also investments in community-building; the creation of active transportation corridors - and safe routes. This work is helping to #ungapthemap, from downtown to the Fraser River, west side to east Van.

The report also presents a softening of the cycling goal from the City's Transportation 2040 plan - that routes be built and upgraded for all ages and abilities, or AAA.

This has been redefined as an aspiration, and in reminding us that aspirations are not always achievable, the report indicates a shift in policy related to bike infrastructure safety and accessibility. This is reflected by the number of bike lanes that will not be AAA - especially those downtown, in the region's densest transportation core.

AAA cycling standards also support potential growth for a healthy and sustainable mode of transportation that can connect residents to key destinations, like UBC, Richmond, North Vancouver and Burnaby.

A notable example of this, where we recommend further improvement, is SW Marine Drive - much of this 6 km stretch between UBC and Granville Street will not be built for all ages and abilities. In addition to lack of separation from motor vehicle traffic, we are concerned about the potential for bike lanes to pass through 'door zones' between parked and moving cars, and that buses may be forced to cross the bike lanes. These are significant safety and accessibility concerns wherever bike routes are planned.

We realize there are various factors in this decision; our concern is that the City is increasing investments in infrastructure built at a high enough standard to put more people on bikes on our roads, but lower than that required to protect them from risk of conflict with others. We therefore recommend that the City of Vancouver closely monitor volume and patterns of use on SW Marine - and all routes where more cycling is anticipated - and move as quickly as possible towards the AAA standard.

2015 saw the City achieve 2020 active transportation targets five years early, in no small part due to their commitment to ongoing cycling improvements, including advance work on additions and upgrades asked for by the community. Those network improvements have brought in steady increases in cycling - 16% growth across the city in the past year, and higher for counters on specific new infrastructure.

Staff and council worked in close consultation with HUB Cycling, Park Board, the Ministry of Transportation and Infrastructure and active transportation stakeholders across the city, to deliver commitments and completed projects like:

HUB Cycling and members are excited about supporting more cycling, to more places, for more people, more safely - and to work with City of Vancouver towards our Transportation 2040 goals, the Healthy City Strategy, the Greenest City Strategy, plus the 2050 Renewable City target - 100% renewable energy sources city-wide.

Thank you, City of Vancouver, for your efforts in achieving these goals.

HUB members and all City of Vancouver residents are encouraged to email mayorandcouncil@vancouver.ca with a message of support and your recommendations regarding the 5-year plan.