Level of funding remains unchanged from last year; HUB to work with municipalities on prioritization

On Friday, February 12, Minister of Transportation and Infrastructure Todd Stone appeared along the Railway Greenway in Richmond to announce the 2016 intake for the BikeBC infrastructure funding program. 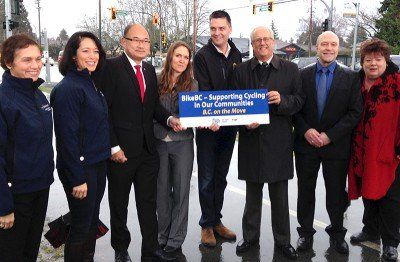 "As we saw last year, BikeBC funds can help UnGaptheMap in communities across BC, especially those in Metro Vancouver where one-quarter of our population are already riding a bike at least once a week, and another 40% would cycle but currently feel unsafe due to a lack of safe infrastructure," said Erin O'Melinn, Executive Director of HUB Cycling.

"BikeBC funds help cities improve bike routes and fill gaps in the network, supporting mobility, health, environmental and cost of living goals in the region - we hope to see more aggressive investment in cycling by the province, and will be working with our local committees, municipal staff and elected officials to prioritize funding applications."

Minister Stone also announced the formation of cycling working groups to provide consultation on George Massey Tunnel Replacement project and the three-interchange Highway 1 - Lower Lynn Improvements project. According to Stone, cycling facilities on new projects and upgrades to provincial highways will receive a 'laser focus' from the Ministry, due in part to meetings in recent months between the Minister, his staff, and groups like HUB Cycling.

Attending the announcement were local MLAs John Yap and Linda Reid, Richmond Mayor Malcolm Brodie and councillors Alexa Loo and Linda McPhail, and a representative of the Richmond Chamber of Commerce.

The deadline for BikeBC applications is April 8, 2016. Local governments can apply online at: www.gov.bc.ca/cyclingfunding

More investment in cycling infrastructure is a key component of the Ministry’s 10-year transportation plan, B.C. on the Move. The BC Cycling Coalition is asking the province to invest $1 billion in cycling over the next ten years, included in the province's finance committee report for the 2016 budget, to be tabled this spring.