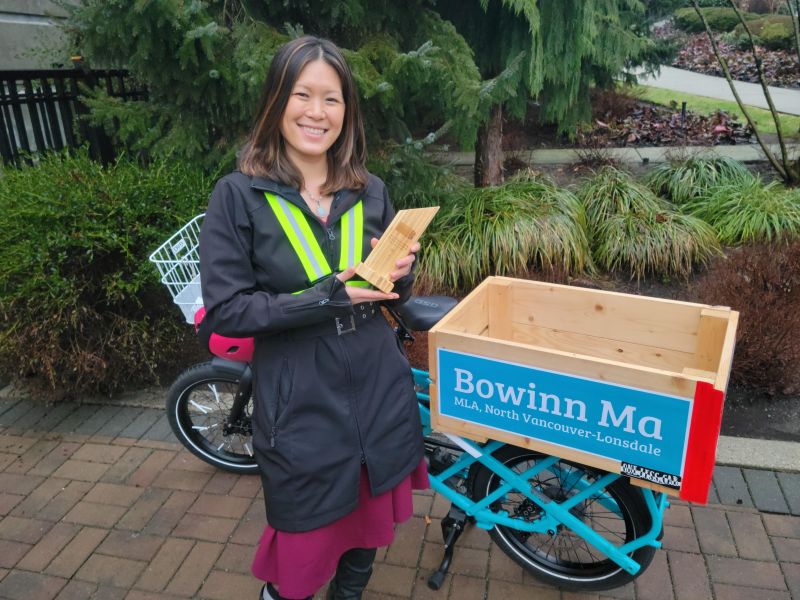 On February 24, 2022, HUB Cycling’s Bike Awards returned for its ninth year to celebrate the people that are making cycling more accessible across the region.

More than 150 people across Metro Vancouver zoomed into the free awards ceremony which recognized municipalities, organizations, schools, and community volunteers for their contributions to making people of all ages and abilities feel more comfortable and safer on two wheels.

Minister of State for Infrastructure Bowinn Ma, won the Arno Schortinghuis Lifetime Achievement Award for her leadership in ensuring active transportation is at the forefront of major infrastructure improvements, such as the upgrades to the Massey Tunnel and the Pattullo bridge. The City of Delta won the Biggest Leap Award for their commitment to ensuring Delta elementary school students learn road safety and for their work developing a Cycling Master Plan for Delta. Other award winners include community volunteers such as Donna Kwan of Richmond for her work spearheading cycling safety programs at Burnett Secondary, South Delta Bikes for the People’s Choice Award in the bike shops category, and the City of Coquitlam for an Infrastructure Improvement Award for the King Albert Greenway extension.

This year’s Bike Awards was hosted by CBC video journalist Uytae Lee, a contributor to the CBC’s Early Edition on urban planning issues in Vancouver.

Award winners were selected based on their effort and investment in the following areas:

This year, twelve elected officials from across the region presented at the Bike Awards including:

City and District of North Vancouver

Miss the event? No worries. Watch it back at your own convenience at this link.