HUB Concerns about the Q2Q Bridge in New Westminster 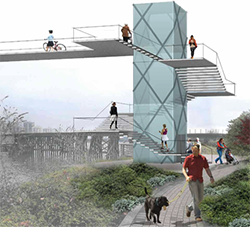 The 'Q2Q' Pedestrian & Bicycle Bridge will serve as a critical connection in the regional cycling network.

After receiving public feedback in 2013, and conducting focused consultation with marine stakeholders, the City chose a stand-alone double bascule (drawbridge) design, which was presented at an Open House in December.

The HUB New Westminster Committee has several concerns with the designs presented:

As proposed, the bridge fails to meet two design principles that the City has set for the crossing:

If you share concerns about the Q2Q Bridge design, visit the project page on the City of New Westminster website, and find our how to be part of next steps in the public consultation process.