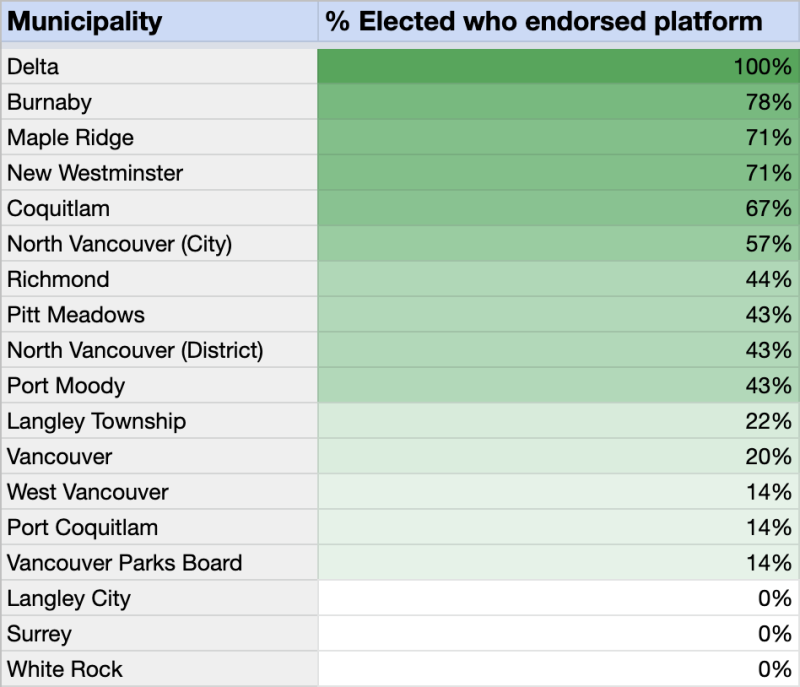 Leading up to the 2022 Municipal Elections, HUB Cycling invited candidates for mayor, city councils, school boards, and park boards across Metro Vancouver to endorse HUB’s Cycling Platform.  137 candidates from 17 municipalities across Metro Vancouver, endorsed the platform, indicating that concern about cycling and active transportation continues to grow as a priority.

Endorsers of our Cycling Platform made up the majority of elected mayors and councillors in these six municipalities.

Strong supporters of cycling who have been elected across the region include:

Large increase in candidate response rate across the region

As in previous municipal elections, we put together surveys with multiple choice and long answer questions to gather candidates’ positions on active transportation and cycling. Across the region, more candidates responded to our survey than in 2018. Some of the biggest increases in participation were:

Overall, the average participation rate across cities increased from 31% to 53%. This shows that cycling and active transportation is a topic that candidates and community members care about.

HUB Cycling, a charitable non-profit that has spent over two decades removing barriers to cycling in Metro Vancouver, shared all these details with local media outlets and our more than 65,000 contacts to help people make an informed voting decision.

Help us make a lasting impact by advocating for a safer and more connected cycling network for people of all ages and abilities by joining HUB Cycling as a lifetime member here.